Blog - Latest News
You are here: Home / Uncategorized / 9 Sure-Fire Ways to Give Yourself the Finger and Wreck Your Business

You might be giving yourself the finger and not even know it. Don’t look back and realize all you needed was to get the other four in line with the one in the middle.

In 2000 we were building a fast-growing fulfillment and logistics business. I was a minority partner and had expressed my concern that we should get some backing. The majority partner felt no need to do it, even though we had an angel investor who wanted a very reasonable piece of the action.

We had some pretty nice names on our customer list, Sun Microsystems, TAP Pharmaceuticals, Johns Manville, Seagate, and a host of other not-so-large companies. After I landed a huge contract with Microsoft my partner came into my office and said, “See, aren’t you glad we didn’t take on an investor?” I replied, “No, in fact, if we don’t get one soon, we could go out of business.” The angel investor brought back an even sweeter deal my partner refused to take.

The business had grown by 420% in three years, yet even with a great profit and loss statement, we had to sell the business within nine months of landing the Microsoft contract. It was a bitter lesson. Even in a great business with wonderful growth, when one part of the business is out of balance with others, it can sink you.

Giving Ourselves The Finger

For us, it was cash flow. We had great profit on paper, but it was stretched out all over the business, and we learned the faster you grow, the less cash you will have in your bank account. It’s the most common killer of businesses.

But there are plenty of ways to spike your business, most of which will sneak up on you by looking like a plus, when they are really a minus. It’s all about balance.

Contrary to common belief, most businesses don’t go under for lack of customers. In fact, it’s almost always the opposite. The number one reason businesses fail is because they grow too fast, or more specifically, some element of the business outpaces the others. Unbalanced growth will put you out of business faster than anything else.

Krispy Kreme has been selling donuts since 1934. In 2000 the company went public and grew 840% in just three years. The stock peaked around $50 per share and then in 2003, started a free fall because the market was over-saturated with Krispy Kreme donuts. In 2009 the stock was at $1.09. The company’s production had outstripped the market demand.

Imbalance Has No Bias

I’ve seen this “unbalanced growth” issue with companies of every size. It respects no boundaries. A real estate agent can get in trouble with too much marketing and not enough cash flow. An Internet store can get in trouble with too many customers and too few suppliers. The entire airline industry is despised because of its focus on profit and a complete abandonment of customer service. This has resulted in huge growth for Southwest Airlines, which balances profits and customer service.

Ways to Give Yourself The Finger

Here’s just a partial list of things that, if not in balance with each other, can put you out of business:

Cash flow – never too much; feel free to be out of balance and be flush!

Staff – very costly to have too many OR not enough–balance!

Production – too much is expensive; too little hurts quality and/or growth

Customers – too many will cause all kinds of bad decision-making

Suppliers – production can be halted by a simple missing part

Products – most often, too many can kill you; rarely, the issue is not enough 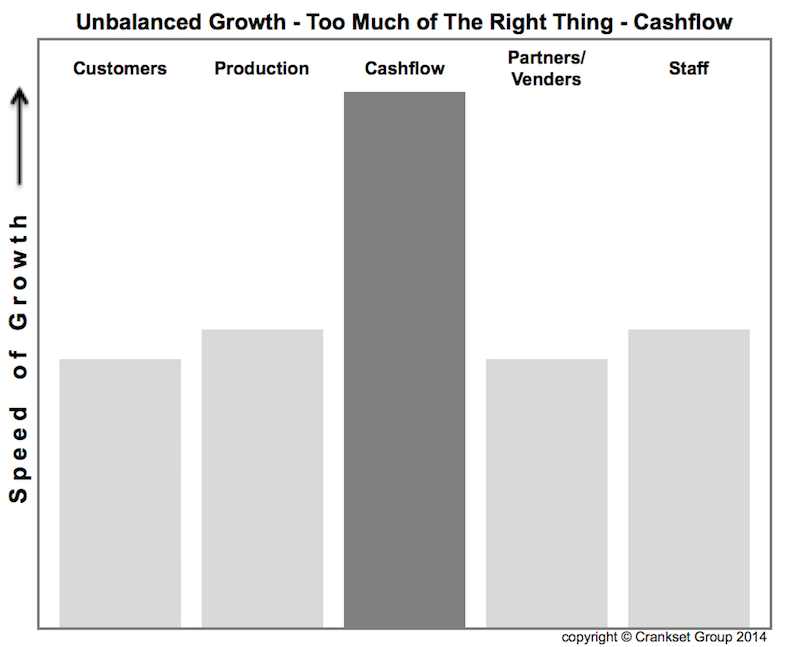 Are You Paying Enough Attention?

What is your imbalance? We’re always fighting one–it’s never not an issue. No matter where you are in the business cycle, you have too much of something, and not enough of something else. And it’s not always easy to see. Take leadership as an example. Too much micro-management and not enough distributed decision-making causes good people to leave, leaving behind unmotivated “responders” who do only what they are told. It could take a year or more to wake up to that.

Fast growth by itself is never a problem. You can grow incredibly fast as long as you make sure all aspects of your business are growing in balance with each other. But remember, lack of cash flow will put you out of business faster than any other type of imbalance.

By the way, all of this applies to your personal life, too. Read The Power of Full Engagement.

Only the paranoid survive. Don’t give yourself the finger. Stay vigilant, stay balanced, and you can grow as fast as you want. Keep growing!